Jobs machines have been enhancing the Cecomp group machine tool park for over 30 years.

"We are very satisfied with this latest investment because it has allowed us to take a crucial step toward improving production and strengthening our relationship with Jobs."

Cecomp, an acronym for Centro Esperienze COstruzione Modelli and Prototipi, is the parent company of an Italian industrial group owned by the Forneris family, founded in 1978 and now composed of five companies scattered around the world, the result of creations from scratch or acquisitions of production companies operating in the same sector.

Born in the Italian territory that is considered the home of the motor vehicle, the Cecomp company of La Loggia, in the province of Turin, has been engaged for almost 40 years in giving shape to the ideas developed by designers, style centres, research & development agencies for car manufacturers around the world.

After the first activities as a small coachbuilder, the company of Giovanni Forneris, trained at the Centro Stile of Fiat, has gradually evolved into an industrial reality of international prestige that, today, is able to support all phases of the product life cycle: style definition, prototyping, pre-industrialization and industrialization, supply of parts, systems, and complete vehicles for low volumes.

The constant growth that Cecomp has recorded over the years, based mainly on continuous investments in new technologies and infrastructures and on the extension of its range of products and services, has seen further impulses with the entry into the company of Giovanni Forneris’ sons Paolo and Gianluca, who have gradually taken the operational reins of the company: Gianluca, responsible for technical and commercial activities, and Paolo, responsible for financial and administrative matters.

The creation of the current company structure began at the beginning of the new century, after the Turin-based company had managed to expand its market, both in geographical terms and in terms of customer portfolio.

The main stages of the Cecomp group can be summarized as follows: in 2005, the purchase of a company in Carmagnola (TO) specialized in the construction of prototype parts and subassemblies for the bodywork, which has allowed to diversify the business up to the mass production of bodywork components of cars belonging to the Premium range; in 2010, the foundation of Icona in Italy and the opening of an operating office in China, lIcona Shanghai, which carries out design and engineering activities for local manufacturers and in which about 80 people work, one third of them coming from the old continent with the task of transferring to the Asian country the European approach to the automotive sector; in 2013, thanks to an agreement with a French car manufacturer, the opening of the Cecomp DOO plant in Slovenia, dedicated to the massive production of sheet metal and to the assembly of some sub-assemblies for cars; in 2014 the acquisition of a historical company in Moncalieri, leader in the Italian automotive sector, with which Cecomp doubles its production capacity; in 2016 the opening of the Icona style centre in California; in the spring of this year the opening of an ultra-modern plant in Piobesi, in the province of Turin, dedicated to the production of bodywork parts and chassis for low volumes, and structured according to the most advanced principles of Industry 4. 0.

It is clear, therefore, a technological evolution and a wide-ranging company growth that brings prestige all over the world to the "made in Italy"; to confirm this, it may be useful to point out some of the main customers of the Cecomp group, such as: Alpine, Volkswagen, FCA, Volvo, Aston Martin, Daimler, Porsche, BMW, Ford, Opel, Renault and other car manufacturers, also in the field of electric vehicles.

"Including all the companies that belong to the holding to which Cecomp belongs - explains Paolo Forneris - today we are able to produce prototypes, show cars, pre-series, low and/or high-volume series production, production of moulding and assembly equipment and to carry out product and process engineering activities. Our strategy for the near-term future is to reorganize the activities of the various production sites, specializing each site for a specific type of process, in order to streamline all company activities and optimize the efficiency of each plant."

This virtuous industrial scenario is the result of the far-sighted strategies pursued in Cecomp that have always privileged the professionalism of its staff at all factory levels and investments in advanced production and design technologies. For example, currently in the La Loggia plant, Cecomp headquarters, the milling department has 14 numerically controlled milling centres divided into two different areas, one for metalworking and the other for polymeric resin processing, which will become 22 after the unification of the "twin" department of the former Model Master plant in Moncalieri, while the laser cutting department has 9 machines of the latest generation and in the vehicle assembly department there are 2 robots for the welding of critical subgroups of the chassis, a chassis assembly line, a body assembly line and a system for photometric surveys of the complete body.

These are just a few examples that justify Cecomp prestigious client portfolio and respectable turnover, which in 2016 recorded a total turnover of 63 million euros, doubling that of 2014, with a forecast for 2017 of 75 million euros.

"In the last 5 years - Forneris emphasizes - we have made investments of about 40 million euros; for the two-year period 2017-2018 we are making other investments to improve the plants in La Loggia and Moncalieri, also with a view to Industry 4.0, and to expand the plant in Slovenia.

Jobs EVER 7 milling centre recently installed in La Loggia is part of this investment program, thus giving continuity to a relationship of true partnership that we have established with the Piacenza-based company."

Cecomp and Jobs: partners for 30 years

It was the early '80s when Cecomp introduced the first Jobs milling machine, model JOMACH 33, a machine that was designed with the substantial technical and engineering contribution of the founder of the Turin-based company who had very clear requirements in the modelling department where resins and plaster were processed.

Since then, many machines by Jobs have been installed over the years, hand in hand with the growth of the business and the need to have a constantly updated fleet of machines, suitable for the several types of activities and products offered by Cecomp.

In this overall picture, the recent installation of the EVER 7 high-speed vertical milling centre is present, which "has replaced - underlines Forneris - just the JOMACH 33 and will join the EVER 5 model of the Moncalieri plant. This new milling centre by Jobs is configured in a more complete way than the other one and, consequently, it allows us to process roughing, finishing and superfinishing moulds without having to move it, with evident advantages in terms of accuracy and machining times, thanks also to the high dynamic performance of the machine."

The EVER 7 centre features a moving crossbeam architecture. The X-axis bedplates are fixed on electro-welded metal columns. The cross-saddle slides transversely along the crossbeam, while the ram ensures vertical movement.

This centre was conceived using the most advanced structural design technologies to ensure the best possible degree of rigidity and the highest dynamic and precision performance.

The EVER 7 model installed in Cecomp is equipped with two heads: Twist T3K continuous and Universal Indexed 45° Kosmo 3. The first one is a fork head, with hydraulic clamping, made of steel and consists of two coordinated polar axes, "C" and "A", which allow to orient the tool in any position. The T3K head can also be equipped with two interchangeable electrospindles and a cartridge magazine that allows the semi-automatic change of electrospindles in a simple and fast way.

The 45° indexed Kosmo 3 universal head is equipped with automatic tool clamping with hydraulic unclamping control. The two half-bodies of the head can be positioned automatically with a 360° indexing system by means of a spindle motor and the two movement planes are at 45° to each other. The minimum positioning resolution is 0.02°.

"We are very satisfied with this last investment - concludes Forneris - because it has allowed us to take an important step forward towards the improvement of the production and, not less important, it has allowed us to strengthen our relationship with Jobs that, in this moment of reorganization within our Group, is supporting us in the installation of the other Jobs machines that we are transferring from one plant to another. A precious Service contribution that we are appreciating, both in terms of professionalism and in terms of responsiveness of interventions." 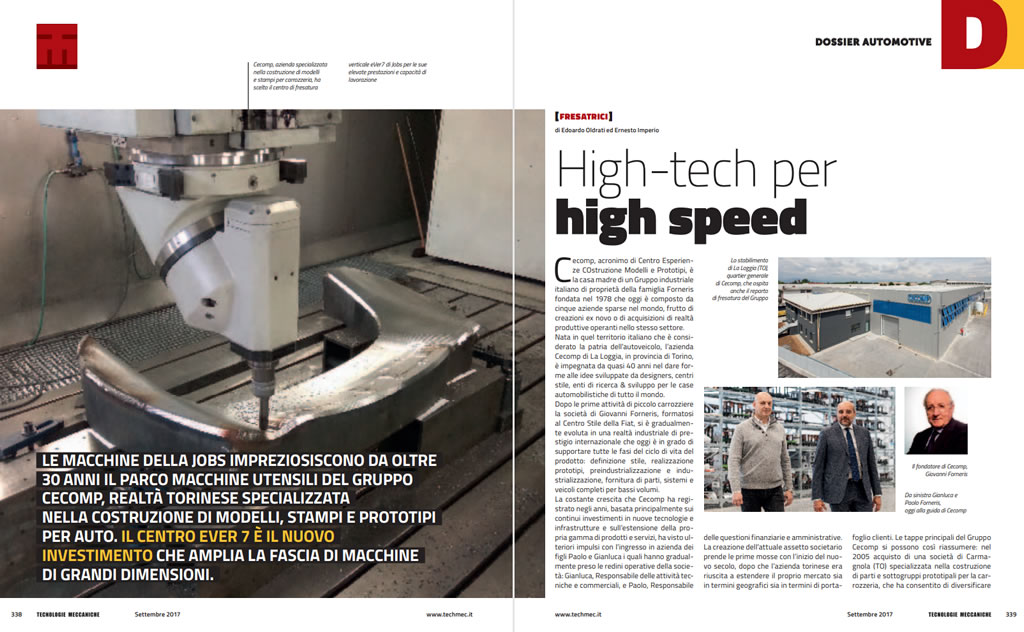